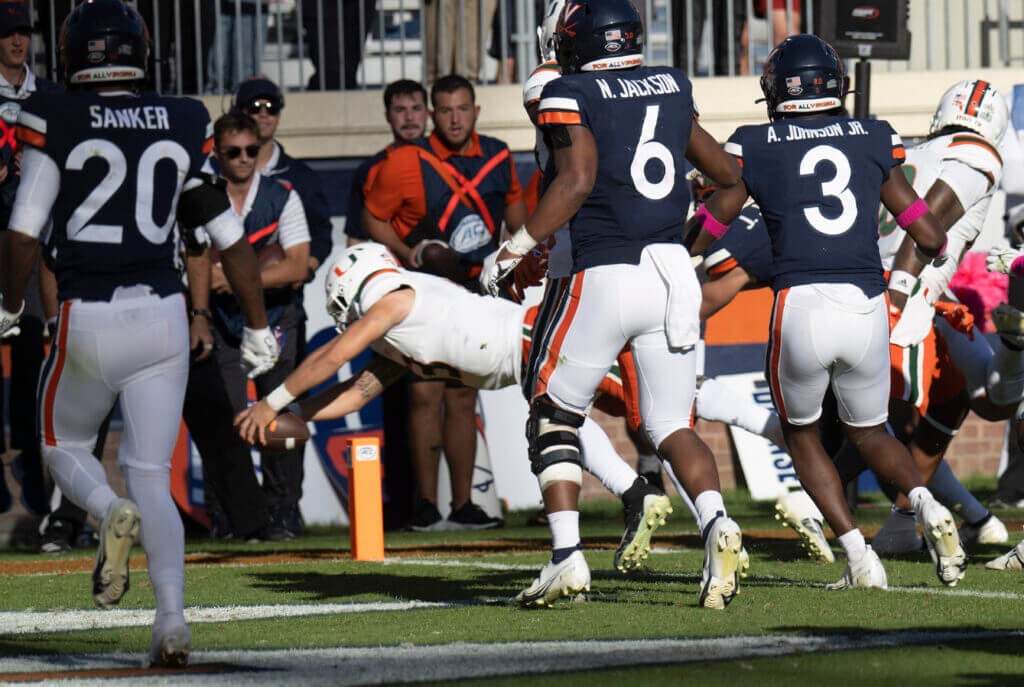 As Jake Garcia pulled the ball out of Henry Parrish Jr.’s chest and looked up toward the end zone, Mario Cristobal said he began to wonder: “Why is he not throwing this ball, dude?”

Garcia, making his first college start in place of injured starter Tyler Van Dyke, had tight end Khalil Brantley open. But instead, Garcia decided to make it a footrace to the pylon.

He won. Garcia’s two-point conversion in quadruple overtime lifted Miami to an ugly 14-12 victory at Virginia — and kept the Hurricanes’ bowl hopes alive.

Miami (4-4, 2-2 ACC) hardly looks ready to be much of a match for rival Florida State (5-3, 3-3) in next Saturday’s primetime showdown on ABC. Injuries continue piling up for the Hurricanes, and the Seminoles flexed some muscle in a 41-16 win at home over Georgia Tech.

But at least the Canes head into next week’s game coming off an emotional win.

1. Miami’s offense is playing conservatively, to say the least, and the Canes aren’t good enough to win many more games playing this way. No touchdowns. Just field goals. And a mere 272 yards of offense. With Van Dyke out and Garcia coming off a five-turnover performance against Duke, it was fair to expect offensive coordinator Josh Gattis would dial things back. He actually left the booth and was coaching down on the field for the first time all season.

The Hurricanes, though, weren’t really aggressive at all — and that might be the way things operate until Van Dyke, the 2021 ACC rookie of the year, returns. Garcia attempted a couple of shots downfield early. He missed Key’Shawn Smith on a deep post and overthrew Xavier Restrepo on a seam route moments later. Garcia later hooked up with Colbie Young on a 23-yard completion to set up Miami’s field goal right before the half. But Garcia’s longest completion outside of that went for 12 yards to Brashard Smith in the fourth quarter on what turned out to be the game-tying drive at the end of regulation.

Garcia finished 15 of 29 for 125 yards with no touchdowns and no interceptions. The 125 yards passing were the fewest by a Miami offense since its 121 yards in a loss at Clemson in 2020.

“When you don’t turn the ball over — you give yourself a chance,” Cristobal said. “I can’t get mad at the offense. I don’t believe in that. Certainly, it’s not up to the standard, but their effort and resiliency is. We’ve got to build on what we did in the run game. There was some life in the run game. We have to get our passing game in sync. Jake played as tough as he could. Credit to him. He’s an excellent competitor and he helped find a way to win us a game.”

2. Parrish might be a one-man show the rest of the way in the backfield. Jaylan Knighton, Miami’s leading rusher in 2021, and Thad Franklin didn’t get a single carry in Saturday’s win, and it’s unclear how much work either scholarship back will get moving forward.

There was a Rivals.com report Saturday speculating Knighton could be headed to the transfer portal soon.

One might imagine that would be troublesome down the road, but a roster purge has always been expected to happen between now and the start of the 2023 season. Parrish did just fine running the football as the workhorse back. He finished with 113 yards on 24 carries, and along with backup quarterback Jacurri Brown (five carries for 28 yards) and UAB transfer walk-on Lucious Stanley (three carries for 18 yards), the running game was good enough to beat Virginia.

“The sideline was very different today,” he said. “I saw a defense supporting an offense. An offense supporting a defense. I saw special teams guys — guys not playing — into it. When you create your energy, don’t shoot yourself in the foot, you give yourself a chance in the fourth quarter or four overtimes.”

Said center Jakai Clark: “A big emphasis was embracing the process no matter what, just keep going and trusting what the coaches are telling us, trusting each other.”

3. Freshman right guard Anez Cooper helped spark the running game. The 6-5, 335-pound true freshman from Pleasant Grove, Ala., a late addition to Miami’s 2022 signing class, made his first career start and helped Miami’s offense to only its second 100-yard rushing performance since the Middle Tennessee State loss. Cooper was beaten for a sack early in the first quarter and was flagged for a false start, but it was obvious he was an upgrade over Laurance Seymore (the starter vs. Duke) and Logan Sagapolu (the starter vs. Virginia Tech).

“He’s a mass of humanity — a very large individual with a tremendous amount of pride,” Cristobal said. “From what I saw, he did a really good job.”

“At the beginning of the week, we made our minds up that we had to make a change and the change was being physical and dominant on every play,” Clark said. “Shout out to big Anez Cooper. He was out there moving bodies today.”

4. Restrepo’s return helped and could be a huge lift against FSU. Miami’s top receiver entering the season didn’t play a lot because he was on a limited snap count but contributed after being lost to a foot injury back in Week 2. Garcia overthrew Restrepo deep the first time he was targeted but connected with him underneath for an 11-yard gain later in the first half.

Miami’s coaching staff initially targeted the Florida State game for when Restrepo could return. Being able to play Saturday should help get his body back into a rhythm faster for more action against FSU.

5. Winning takes a little luck sometimes, and Miami got lucky twice. The Cavaliers had two big self-inflicted wounds in Saturday’s loss. Tight end Grant Misch dropped a touchdown pass from Brennan Armstrong in the third quarter. Misch was open in the end zone and the pass was thrown slightly behind him. But there wasn’t a defender near him. It should have been a touchdown.

Earlier in the game, Virginia could have taken the lead had Armstrong been more accurate. He overthrew a wide-open Dontayvion Wicks down the middle of the field. Miami cornerback DJ Ivey was beaten in coverage, and there was no safety help.

Miami’s secondary gave up three pass plays of more than 30 yards: a 30-yarder from Armstrong to Keytaon Thomspon, a 47-yarder to Lavel Davis Jr. and a 64-yarder in which Mike Hollis caught a short pass and would have gone the distance if not for a tremendous effort from Tyrique Stevenson to push him out of bounds at the 3.


Miami cornerback Tyrique Stevenson (2) reacts to not intercepting a pass intended for Kenton Thompson in the second half. (Lee Luther Jr. / USA Today)

6. Stevenson made two game-saving plays. The first was his tackle of Hollis. The other was a pass breakup in triple overtime when it looked like Virginia might have won the game.

“He won the game for us twice,” Alonzo Highsmith was heard shouting in the postgame locker room.

Without safety James Williams – a late scratch after he was unable to get through pregame warmups — Miami’s secondary was hardly great. But at least Stevenson and Kinchens made a few key plays to help the team to victory.

Virginia’s offensive line is among the worst in the country (2.86 sacks allowed per game), and Taylor led Miami’s five-sack attack with six tackles, four for loss, and 1 ½ sacks by himself.

The Hurricanes lost defensive end Akheem Mesidor midway through the first half to a hamstring injury, and linebacker Wesley Bissainthe went down shortly thereafter. It’s unclear what their status is for FSU.

8. Miami kicker Andy Borregales got some sweet revenge. Borregales missed a game-winning field goal against Virginia last season but responded with a career-high four field goals in the win.

“It’s human nature to get a little nervous,” Borregales said. “We were in a dark place. Getting a win like today — even though it was a close one — it feels great. We fought with all our might.”

9. Beating Florida State could help salvage a mediocre season. ESPN’s Power Index gave Miami a 38 percent shot of finishing the season bowl-eligible entering this week’s game. The Hurricanes should be underdogs against Florida State and Clemson but might have a shot at winning at Georgia Tech and at home against Pittsburgh down the stretch.

That doesn’t mean they won’t be fired up to face the Seminoles next week.

Said Stevenson: “I guarantee you we’ll be hyped up.”

(Top photo of Jake Garcia diving into the end zone in the fourth overtime to give Miami the victory: Lee Luther Jr. / USA Today) 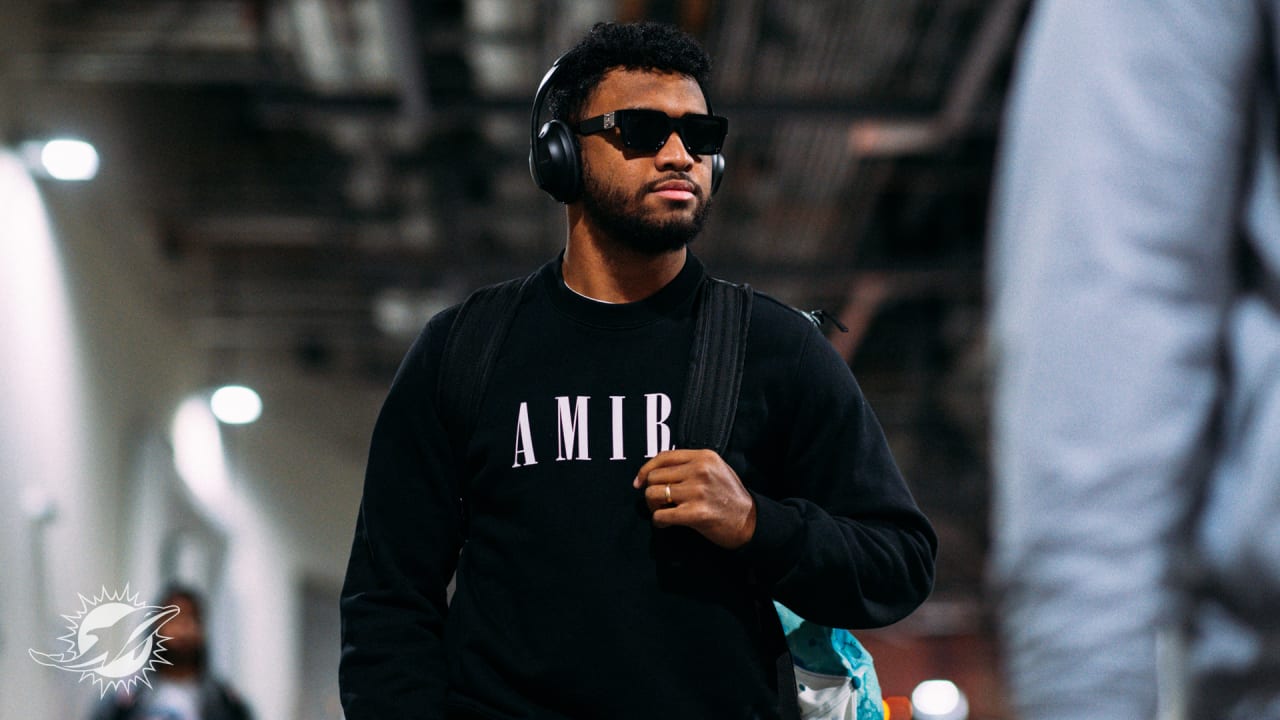 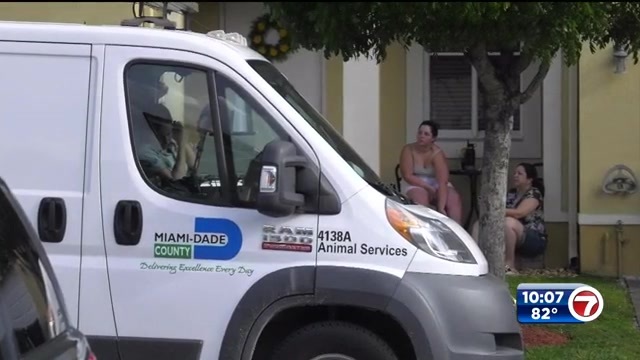