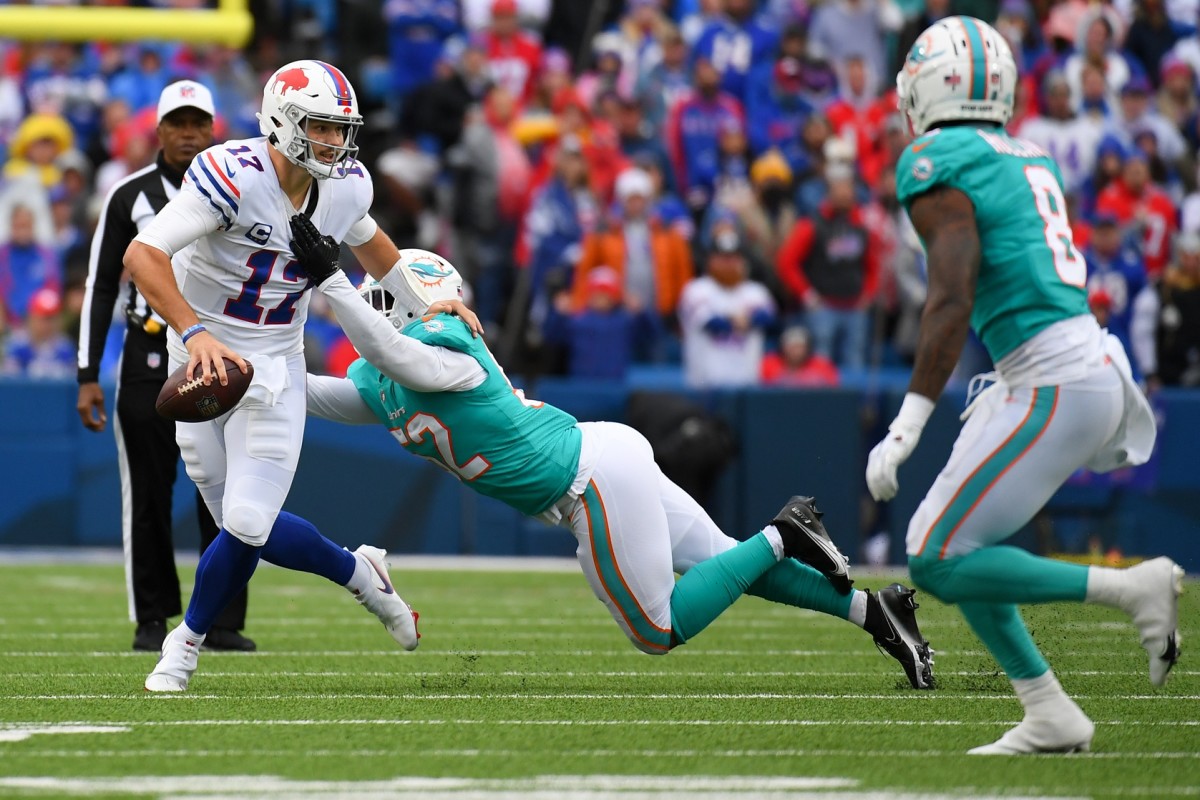 The Miami Dolphins will look to move their record to 3-0 in the 2022 when they face the Buffalo Bills at Hard Rock Stadium on Sunday.

The Dolphins, who have lost seven in a row against the Bills, will enter the game as 3.5-point underdogs according to the SI Sportsbook.

Here’s a roundup of national predictions on this game:

Analysis: “TuAnon is flourishing after two weeks and buddy-oh-buddy is there potential for Dolphins fans to come out in full force with a home win against the Bills here. Miami could flagplant their interest in trying to steal the AFC East with a win here and Mike McDaniel’s COY odds would be roughly -150 with a win here. I’m inclined to back Buffalo but think the over will be a more popular play. The DFS ownership in this game will be outrageous after seeing the Bills offense and Miami’s comeback last week. This pick of mine is not fading Tua or Miami, it’s simply a bet on the Bills being by far and away the best team in football and people not catching up to it yet.”

Analysis: “This is one of the best games of the week, featuring two 2-0 teams that can score. The Bills are playing on the road on a short week, which is an advantage for Miami. But this Buffalo team is riding high. The Dolphins defense wasn’t good last week. The Bills defense has been. That’s the difference.”

Analysis: “Miami is playing well and a good pick in another week, but it’s crazy to bet against these Bills. Their offense is so prolific that it’s easy to forget about the stifling defense. Most complete team in the NFL.”

Analysis: “If the Dolphins can pull off this upset, then Mike McDaniel might as well be crowned NFL Coach of the Year. If Miami proved anything in Week 2, then it’s that McDaniel is willing to air it out with Tua Tagovailoa and star receivers Tyreek Hill and Jaylen Waddle. These are “if” statements, however. Josh Allen is the truth, and he is 7-1 with 21 TDs and five interceptions against Miami. He comes through again in what could be the best game of the week.”

Analysis: “All Mike McDaniel has done in his first two weeks as Dolphins head coach is beat a pair of Super Bowl winners in Bill Belichick and John Harbaugh. His most difficult test yet comes here in Week 3 with the red-hot Bills heading into town.”

Analysis: “Several league leaders through two weeks will be on the field Sunday. Wide receivers Tyreek Hill (284 yards), Stefon Diggs (270 yards) and Jaylen Waddle (240 yards) are the NFL’s three leading receivers, catching passes from the league’s leading and fourth-leading passers, respectively, in the Dolphins’ Tua Tagovailoa (739 passing yards) and the Bills’ Josh Allen (614 passing yards). And on the defensive side of things, Bills safety Jordan Poyer is one of five players with multiple interceptions this season.”

Analysis: “The Buffalo defense should be better equipped to make a stop or two of the Miami offense than the Miami defense will be of the Buffalo offense.”

Analysis: “The Bills have steamrolled the competition two weeks in a row, and they’ll keep it going against a Miami team that is also 2-0 but isn’t in the same class as Buffalo.”

Analysis: “Tough spot for the Bills. It’s a road trip on a short week with so many secondary injuries that it’s hard to know who’s playing for Buffalo as of publication. The Dolphins’ offensive line has already improved to average and the running game, which is so necessary to beat the Bills, was excellent when needed last week. These Fins can keep up in a shootout, even if they fall short.”

Analysis: “This is a huge opportunity for the Dolphins, who incredibly are involved in a matchup of 2-0 teams for the first time since 2001! A victory in this game would stamp the Dolphins as legitimate contenders in the AFC, regardless of the Buffalo injuries. Shoot, even staying close to the Bills until the end might do the trick. The Dolphins downplayed the significance of the game all week, as one would expect them to do because what happens to the psyche if you blow up this game and it ends up going badly. But it says here it won’t blow up. In fact, we’re thinking the other way. While we cautioned against making too much of the win at Baltimore beyond what it meant that day, we also could make the argument that everything worked out in the Bills’ favor the first two weeks and that, while they are really good, maybe they’re quite as invincible as they’ve shown. Or maybe we’re just completely buying into what Mike McDaniel has done for this offense and think he’ll come with the perfect scheme to deal with the Buffalo pass rush to where, yes, the Bills will get some sacks, but the Dolphins still will be able to produce in the passing game. And we’re thinking the defense comes up with a performance that looks a lot more like it did in Week 1 than Week 2. Or maybe it’s just a gut feeling that the time has come for the Dolphins losing streak has arrived. Whatever it is, it says here the Dolphins are going to be 3-0.” 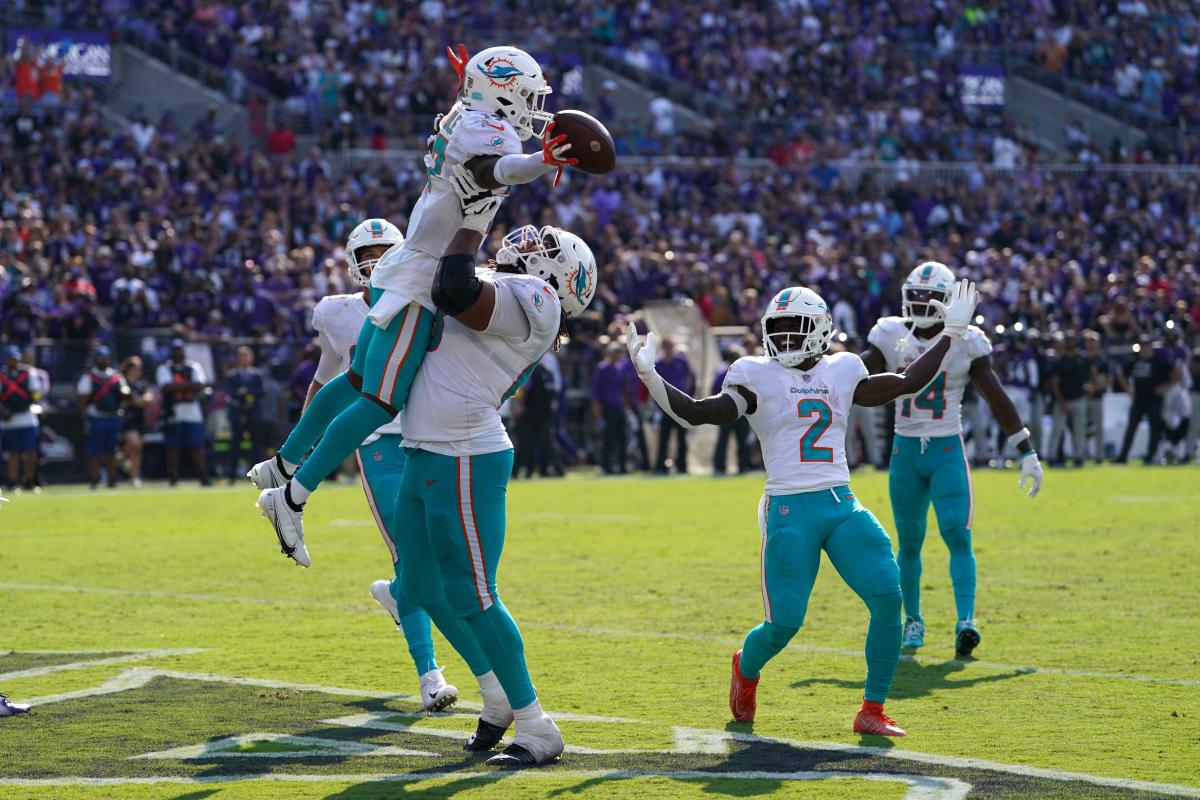