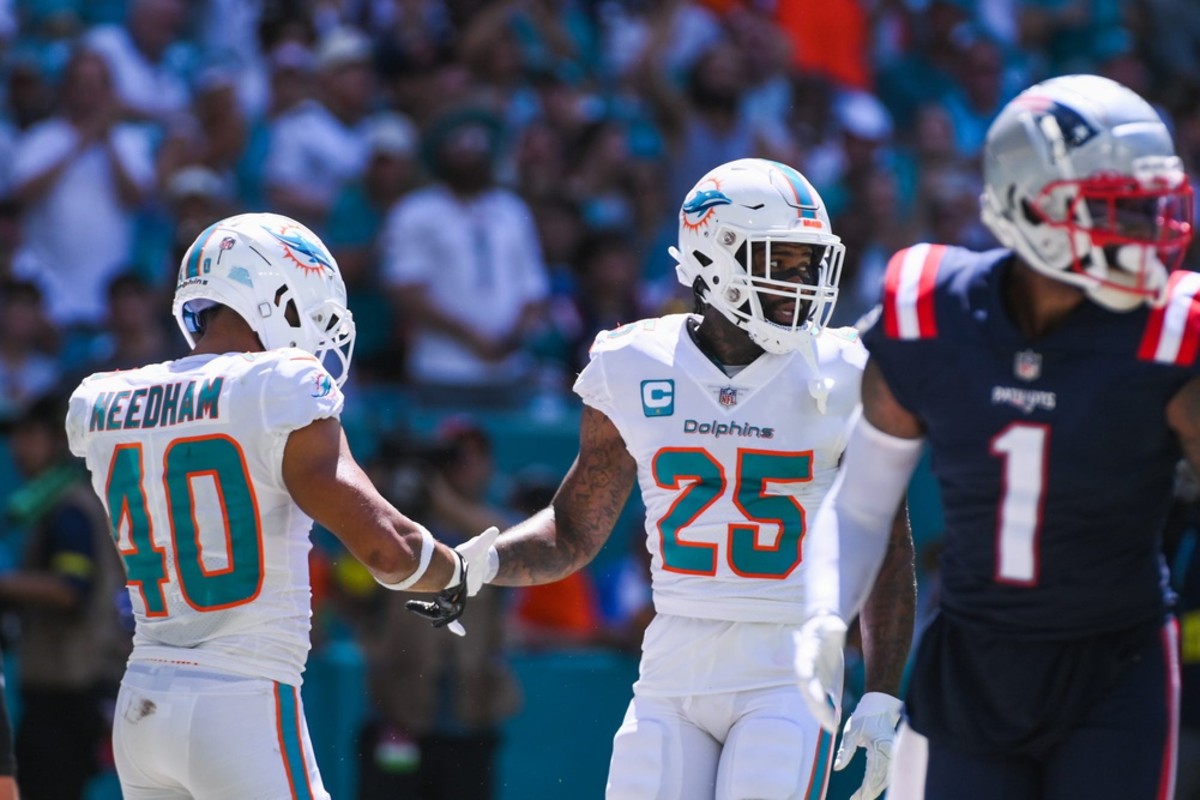 The Dolphins’ biggest challenge on defense will be trying to slow down the Bills passing game — quarterback Josh Allen and wide receivers Stefon Diggs and Gabe Davis in particular — and that’s where Howard will come in.

He’s the Dolphins’ best defensive player and will need to be at his best, which will mean rebounding from what was a most atypical outing against Baltimore.

HOWARD HAS TOUGH OUTING AGAINST BALTIMORE

Howard was on the wrong end of the 75-yard touchdown pass from Lamar Jackson to Rashod Bateman when he was beaten inside in a one-on-one matchup and Bateman took the short completion all the way to the end zone.

But it wasn’t just that play, even though it was the most glaring.

Howard gave up four completions on seven targets in the Baltimore game and his opponent passer rating when targeted,  according to Pro Football Reference, was an unslightly 141.4.

That’s quite a difference from the 72.6 and 47.9 marks from the past two seasons when Howard was selected to the Pro Bowl each time.

We also need to mention that one of the incompletions in Howard’s direction came when Howard jumped a sideline route but dropped what looked like a sure pick-six.

Dolphins cornerbacks coach/defensive pass game coordinator Sam Madison, who didn’t drop many easy picks during his stellar career in the Miami secondary, didn’t hesitate to let Howard know about it.

“Absolutely. I definitely did,” Madison said Thursday morning. “He’s definitely trying to reach a goal. And by dropping those, he’s not going to get there as quickly as possible. He was heartbroken. And just being able to watch film over here in the last couple of years, he’s been in those positions before. So throughout the course of the week, we’re always doing ball drills and making sure that everybody is in the right position and being able to get their hands on the ball.”

Dropping potential interceptions isn’t something we see very often from Howard, whose ball skills rank at or near the top of the cornerback position in the NFL.

Then again, we also don’t see Howard getting beat as decisively as he did on the 75-yard touchdown pass.

“Just talking to ‘X’ about technique,” Madison said. “Every single play, every down, throughout the course of practice, when you’re in games, when you’re in film study, just making sure that you’re on point at all times. It’s just some lackadaisical play for his technique. And I’m pretty sure if he had that play back, he’d want to go back and do it again. But watching it, coming to the sideline, being able to break it all down and give him the information so he can go out there. Then after that, he went out there and he was confident and he played extremely well towards the end of the game. So just from playing one all the way to play 67 or 77 or 55, you’ve got to be locked in. After that, he definitely was locked in. So we just want to get him there from the beginning of the game and making sure little things like that don’t creep up during the middle.”

HOW WILL HOWARD BE USED AGAINST BUFFALO?

Compounding the issues for Howard and the Dolphins is the groin injury that had him miss practice Wednesday and be limited Thursday, though Madison said before practice he anticipated Howard being in the lineup against Buffalo.

As to exactly how the Dolphins will use Howard, whether they match him up against Diggs, that remains to be determined — or maybe it already has been determined, though it won’t be revealed until we see it on the field Sunday.

“We’re going to see what happens,” Madison said. “Coach (Josh) Boyer does a very good job of dissecting what offenses do and where we need him to go. And he’s always up for any matchup. His mind-set is right. I think when it all comes down to it, he’s going to go out there and put his best foot forward no matter who he’s covering.”