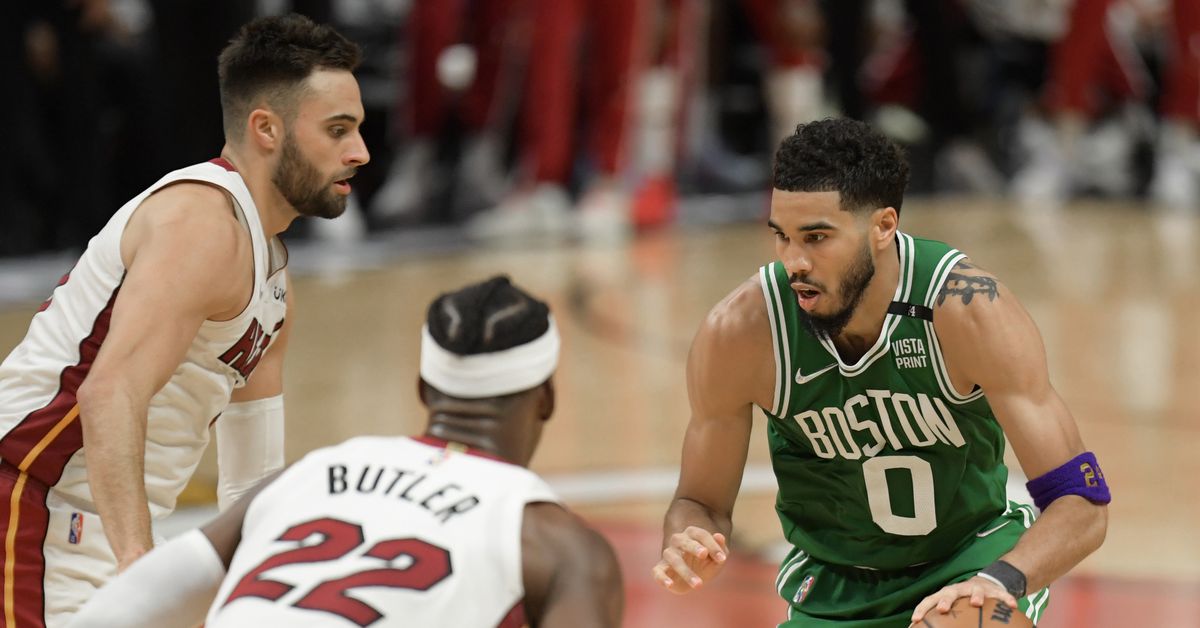 Jimmy Butler had another huge game and Bam Adebayo was aggressive, but it wasn’t enough for the Miami Heat in their 100-96 loss to the Boston Celtics in Game 7 of the Eastern Conference Finals on Sunday night.

Butler did everything he could to keep the Heat from getting blown out in the first half after another lethargic start at home — a perplexing one at that after such a gusty Game 6 showing on the road. This was another game in this series in which the team that raced out to an early lead essentially kept control of the game for the remainder of the night. It was Boston this time that withstood every Heat rally, right down to the final agonizing minutes of the game in which the deficit was reduced to just two points.

That’s when Butler decided to pull up for a three-pointer to take the lead with seconds left in the game over a backpedaling Al Horford and no one else behind him. It’s a moment that every Heat fan will replay in their mind all offseason and as bad of a decision it looked as the shot rimmed out, if it wasn’t for Butler the game would have been decided long beforehand.

Two other plays will also make Heat fans ruminate on for months on end. There was a poor decision by Victor Oladipo to attempt a deep three-pointer near the conclusion of the third quarter in a 2-for-1 opportunity that killed Miami’s momentum at the time.

The other was a bizarre decision by the NBA to take away three points from the Heat after replays may or may not have shown that Max Strus’ heel grazed the court line during his shot. Maybe it did, maybe it didn’t (and there’s a good argument that his heel hovered over the line and didn’t actually touch it when he released the shot) but it proceeded to have a profound affect in a tightly-contested Game 7 in which the winner would go on to the NBA Finals. (I personally don’t recall this ever happening in a game with so much at stake, but perhaps I suffer with undiagnosed selective memory.)

Boston may have won the game but they struggled to put away a Heat team down to just two viable scoring options with Tyler Herro playing seven scoreless first half minutes after just two missed shot attempts. Starters PJ Tucker, who was also scoreless in 17 minutes, and Strus, who scored 11 eight minutes, didn’t provide much either. Besides Herro, only Gabe Vincent (four points) and Oladipo (nine points) entered the game as reserves.

Kyle Lowry had a decent game with 15 points and seven rebounds but just three assists. Adebayo notched 25 points and 11 rebounds and Butler finished with 35 points after doing most of his damage in the first half.

Home-court advantage was a non-factor as well thanks to an anemic home crowd, who apparently were only capable of cheering on their team when the Heat went on short runs but never when they actually needed to boost their team’s spirits when the going got tough.

Heat Nation, this loss truly stings. Had they stayed reasonably healthy and demonstrated the kind of depth they utilized to great effect in the regular season, where they finished as the top team in the East and tied for the third best record in the NBA, then this series would have certainly turned out differently. But what’s done is done and they still finished the season just one win away from a possible NBA Finals berth when no one gave them a chance to make it this far.

The Heat, especially Butler, played valiantly to the end and that’s all their fans can ask for. Many roster decisions will have to be made in the offseason however, but those discussions will have to wait for another day. Hot Hot Hoops will be here for you all off-season long with news, analysis and much more as the NBA Draft nears and free agency begins.

Thank you for reading tonight and all season long.